Three recent books of Joseph Papin's drawings and writings are available at Amazon.com  If you search on "Joseph Wood Papin," the three new books should come up, along with a "Page on the Author - Joseph Wood Papin," with his new books and many of the ones he illustrated in the 1960s and 1970s:
https://smile.amazon.com/Joseph-Wood-Papin/e/B071CVK8MS/ref=sr_ntt_srch_lnk_3?qid=1493096242&sr=1-3
I asked Amazon to upload only the books with his drawings to his page, but as there are often more than one edition of the same book, you should check to see if the edition that it posted is the correct one.  All of his early books are out-of-print and available only as used copies, so make sure that it's the right edition if you choose to order one.  I noticed, for example, that one of the pictures in his book list is of an edition that he clearly did not illustrate.  The easiest place to check the right edition information is on his Wikipedia entry at:
https://en.wikipedia.org/wiki/Joseph_W._Papin
The Street is My Studio: The Bowery
https://www.amazon.com/Street-My-Studio-Bowery/dp/1537758195/ref=sr_1_fkmrnull_3?keywords=joseph+wood+papin&qid=1556815132&s=books&sr=1-3-fkmrnull 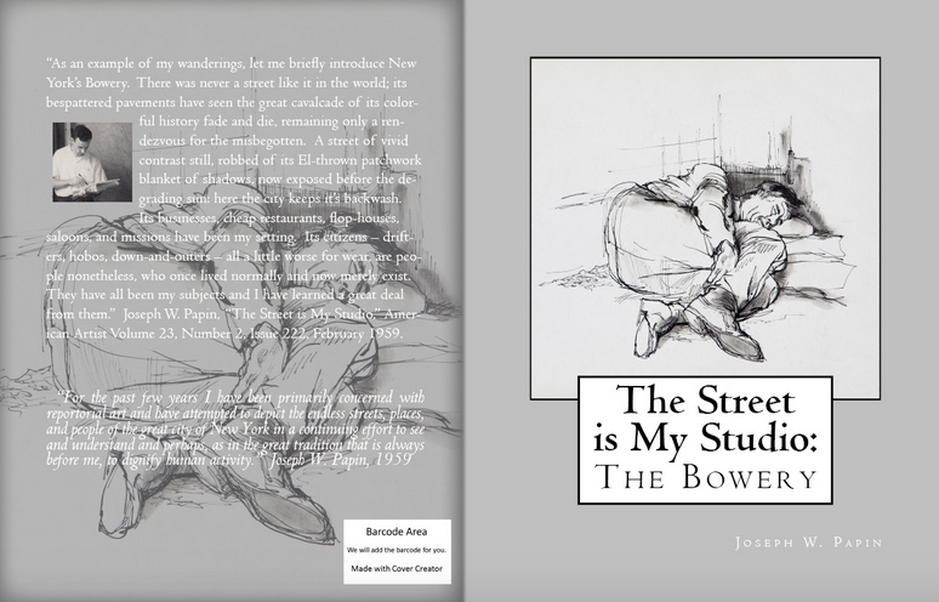 “The book, The Street is My Studio: The Bowery, includes 74 illustrations, all drawn on the Bowery, New York City's skid row, in the later half of the 1950s.  Quite a few of these drawings were included in Joseph Papin's earliest portfolios; it was primarily on the basis of this work - along with his drawings of people in the streets and on the subways - that he landed his first freelance jobs.  In the process of sorting his work to bring his courtroom drawings to the Library of Congress, some hand-written field notes surfaced.  Consisting of notes on the Bowery and some in-depth interviews with two of the men he met and drew on the Bowery, these writings form the written content of this book.  The notes were accompanied by a proposal, written by Judge John M. Murtagh, Chief Magistrate of New York City from 1950 to 1960.  Judge Murtagh presided over the night courts where Joseph Papin drew, and their shared compassion for the inhabitants of the Bowery would have drawn them together.  Judge Murtagh was appointed the Chief Justice of the Court of Special Sessions in 1960, undoubtedly one of the reasons the book never came to fruition.  We are glad to be able to bring these previously unpublished drawings and notes to light, nearly sixty years later.”
The Street is My Studio: Joseph Wood Papin
https://www.amazon.com/Street-My-Studio-Joseph-Papin/dp/1545369429/ref=sr_1_fkmrnull_1?keywords=joseph+wood+papin&qid=1556814837&s=gateway&sr=8-1-fkmrnull 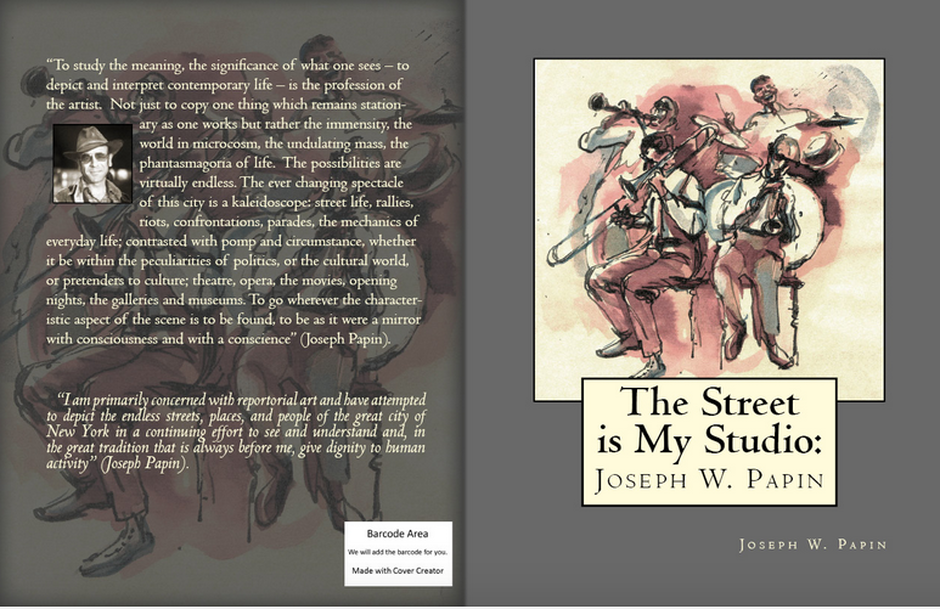 "The book, The Street is My Studio: Joseph Wood Papin, presents 74 illustrations of Joseph Papin's work from the 1950s to the early 1990s, with an emphasis on his street drawings from the late 1950s; it also contains plates of more recent portfolio pages.  It includes the complete text of The Street is My Studio, the 1959 article he wrote in "American Artist"(now defunct after 75 years of publication), along with additional notes on reportorial art describing his philosophy, values, vision, and the endless possibilities for compelling people, places, and events to be drawn.  Included is his full vita - a listing of the diverse assignments that he completed during his thirty-five year career as a professional artist.  This book also presents his longstanding desire to illustrate an ongoing chronicle of daily life in New York City (in a form similar to Feliks Topolski's Chronicles in Europe), and his descriptions of the difference between the status quo and what was possible.  Indeed, he did cover the great majority of the ideas that he outlined, and The Street is My Studio series of books serve as a sort of modern day equivalent to those chronicles."
The Street is My Studio: East Harlem Protestant Parish
https://www.amazon.com/Street-My-Studio-Harlem-Protestant/dp/1545367272/ref=sr_1_fkmrnull_2?keywords=joseph+wood+papin&qid=1556815057&s=books&sr=1-2-fkmrnull 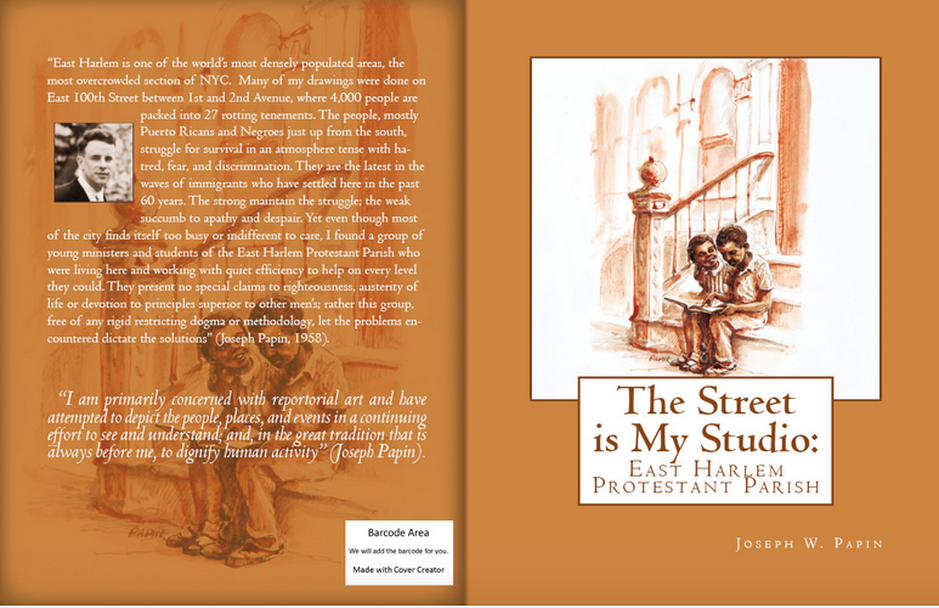 “The book, The Street is My Studio: The East Harlem Protestant Parish, contains 68 illustrations and only one page of text.  Joseph Papin wrote about his work in East Harlem in the notes for his 1959 American Artist article, The Street is My Studio, and this comprises the main body of text of this book. The rest of the book consists of illustrations of East Harlem and the East Harlem Protestant Parish (EHPP).  Joe Papin worked with the EHPP from 1958-1963, teaching drawing to the youth, and illustrating the EHPP's lectionaries (scriptural readings for different times of year) and other illustrated materials.  The drawings here are of the people and places of "Spanish Harlem" in the late 1950s and the early 1960s.  Joseph Papin also illustrated a book, Come Out the Wilderness, on the East Harlem Protestant Parish, published in 1962; the dust cover of that book is included in The Street is My Studio: The East Harlem Protestant Parish.  His illustrations of young men drawing, reproduced near the end of this book, were drawn of the art classes that he taught to the youth, and provide a visual record of his interest in sharing his expertise with others.”
Our intention with self-publishing these books is to share Joseph Papin's work with as many of his family and friends as we are able to at the least possible cost.  It was a delight to discover his notes, a challenge to transcribe them, and a joy to have them appear in book form.
Powered by